The Female Architects—Surviving the Journey to the Top

Female Architects by the Number

Winner of the Emerging Woman Architect of the Year Award 2014, Julia King talks about her work in both the UK and India

While women have forged a path in many male-dominated industries today, challenges still face female architects. As women are slowly moving into relevant positions and even leadership roles, there is still plenty of work to be done. Fortunately, awareness of inequality has been the first step in the creation of organizations and movements to support women passionate about the field. In addition, some outspoken architects are bringing the issue into focus, increasing awareness and encouraging women interested in studying architecture to pursue the profession as a legitimate career path.

While statistics offer hope that the presence of female architects are on the rise, the numbers also show there is more work to be done. According to a 2018 report in Artsy, women comprise approximately half of the students in architecture schools today. However, the numbers begin to decline dramatically as students move to the professional world, with women making up only 18% of licensed architects. Even more concerning is the fact that just three of the top 100 architecture firms are led by women.

When considering global numbers, the statistics start to lean more in the favor of women in the industry. The National Council of Architectural Registration Boards (NCARB) estimated in 2016 that women made up more than one-third (36%) of all newly licensed architects. That number marks a small increase from 2015, when 34% of new licenses went to women.

Issues Facing Women in the Industry

One of the biggest concerns female architects have today is inequality when it comes to salary. A 2017 article in the journal Archipreneur found that men earning $100,000 or more outpace women earning the same amount by 7%. The difference exists even though more women than men have a four-year degree. At the lower end of the salary scale, nearly twice as many women as men earn less than $50,000.

The issues relating to salary inequalities was summed up in part by a 2018 article in the New York Times, titled, “Where are all the Female Architects?” The report noted that pipeline is not a problem as it is in other industries, since plenty of women are going to school to train for the profession. Instead, a generalized negative perception of women in the profession could be at the root of the difference. The New York Times reports that as recently as 2018, there were assumptions that women would quit if they got married or had children, or that they would not be able to lead with authority on job sites. Even their creativity has been questioned at times in this male-dominated industry.

Fortunately, more women are becoming known in the industry today, paving the way for other female architects to join the ranks. The New York Times also reports that more women are getting appointed as deans or directors at architecture programs at prestigious schools like Cornell, Columbia, Princeton, and Yale. Female architects at the top of companies are also gaining more recognition as trade journals and mainstream media are highlighting these women.

Industry organizations are also beginning to make a place for women – through conferences geared specifically to female architects or committees designed to bring women in the profession together. The American Institute of Architects (AIA) is hosting its first Women’s Leadership Summit in September of this year, in an effort to bring together female architects and those that have achieved leadership roles within their organizations.

According to the AIA website, the goals of the Women’s Leadership Summit are:

In addition, the AIA New York features a Women in Architecture Committee to develop and promote women in the industry through monthly meetings and other events. The local committee focuses on licensure, mentorship and networking opportunities to help women take their careers in architecture to the next level.

Pioneers Taking the “Female” Out of the Position

As more women take the stage in the architectural industry, women following in their footsteps can find both inspiration and knowledge to succeed in their careers. Dorte Mandrup, a Danish architect who is also the creative director and founder at Dorte Mandrup, published an article in 2017, which appeared in Politiken and Dezeen.

In the article, Mandrup makes the point that she does not want to be referred to as a “female architect.” Instead, she wants to be known as an architect – one whose work can compare with the creativity of any male without having the additional label attached. She believes that until women stop getting referred to as “female architects,” true equality within the industry cannot happen.

Liz Ogbu trained as an architect at the Harvard Graduate School of Design. However, she referred to herself in the New York Times article as a “designer, social innovator, and urbanist.” Her point was that women can make a name for themselves in the world of architecture to redefine success within the industry. Instead of focusing solely on skyscrapers and museums, Ogbu is focusing on designs for the underprivileged such as shelters for immigrant day workers.

“In many ways, architecture is a profession that has been the epitome of the dominant white patriarchy, from most of the celebrated starchitects to the all too frequent obsession with buildings that are better known for their beauty of the object rather than the quality of the life that they enable…I’ve been committed to a design practice that is rooted in elevating the stories of those who have most often been neglected or silenced.”

Whether you are looking for your very first position in the industry or ready to take your career to the next level, we can help. We help architects, interior designers and others in the building design profession find the job of their dreams. Contact CFA today to learn more. 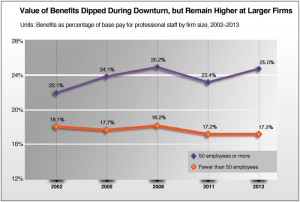