Pssssst….  Ever hear about the secret room in the Washington Square Arch?  Think you know what it’s for?

GENIUS ARCHITECT!  SADISTIC MILLIONAIRE!  STUNNING GIRL FROM NOWHERE!  Are these yesterday’s headlines?  The answer is no; instead they are from June 25, 1906 when Stanford White was murdered by Harry Kendall Thaw.  Newspapers touted that this was the Trial of the Century!  And perhaps, the very first such headline, considering they were only six years into a new century.

Thaw claimed that he shot White because he discovered that White was having an affair with his rather young wife, Evelyn Nesbit.  Some may call it schadenfreude, but we all certainly derive some degree of pleasure when the facade is stripped off of respectability and wealth.  And, after all, they say that Stamford White single-handedly invented the American facade of the moment.  His firm designed the icons of their day, the Astor, Vanderbilt and Tiffany mansions; the Century and Metropolitan clubs; the Washington Square Arch; and the second Madison Square Garden (now long destroyed along with the original Penn Station), where he was killed. 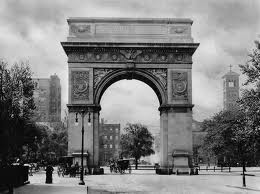 Perhaps, White was so good at facades because he himself had so much to hide.  By the end of a relatively short life (he died at 52), he was over a half million in debt and faced possible imprisonment.  His most manic appetite, though, was for underage chorus girls.  He had a red velvet swing installed where Nesbit and other girls in various degrees of undress would entertain him, which became a focal point of the trial press coverage as well as a movie or two.  There are conflicting accounts of whether this swing was in the tower at the old Garden or at his Chelsea apartment or perhaps in a secret room???

Bob, Careerpoint Staffing Exc. VP, holds a Bachelors of Science Degree in Architecture from The City College School of Architecture, Urban Design & Landscape Architecture. He joined CareerPoint in 2013. He has over twenty-five years’ experience in contract employment services and technical staffing. This includes expertise in recruiting and staff development, contract employment sales and client development, professional searches and operations management.