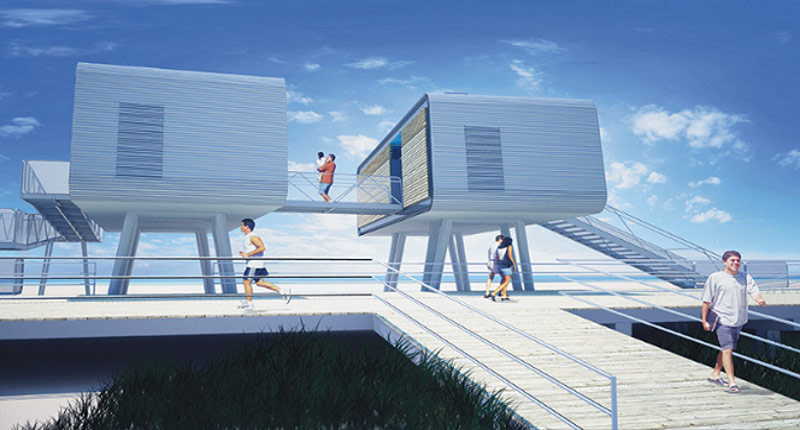 Consulting For Architects has placed an architect at Garrison Architects on a short-term basis. He is currently working on the fabrication phase of this project

Surf’s up! But don’t worry, the city’s new beach facilities will be able to handle it.

The New York City Department of Parks & Recreation and Department of Design and Construction (DDC) have teamed up to answer Mayor Michael R. Bloomberg’s mandate that the Hurricane Sandy–pummeled seaside in the Rockaways, Coney Island, and Staten Island be repaired and ready for sun worshipers by Memorial Day weekend. In part, this work involves rebuilding sections of the boardwalks and restoring WPA-era concession stands. It also involves the design, fabrication, and installation of 17 new buildings, which will replace destroyed lifeguard stations, restrooms, and offices.

The city hired Garrison Architects to design the new facilities. “In December we were asked by David J. Burney, [commissioner] at the DDC, to submit some modular work to restore the beaches,” said James Garrison, founder of the Brooklyn-based practice. “We started before Christmas and the schedule required us to be done with design and construction documents by January 23. We completed fundamental design by January 27 working 16-hour days.”

In order to deliver the project on such a tight deadline, the design team opted for an industrialized building process. The 17 buildings, broken down into 35 modular units of shipping dimension—12 feet high, 15 feet wide, and of varying lengths up to 57 feet—are being prefabricated in the Chicago shop of the Deluxe Building Corp. Garrison provided Deluxe with 3D models that feed directly into the fabricator’s CNC plasma machines, which cut the profiles. “This whole idea that means and methods aren’t the realm of the architect breaks down when a building is completely designed and goes into the fabrication process from the architect’s documents,” said Garrison. “It changes the way we think about our relationship to construction.”

Once complete, the modules will be trucked to the site and placed atop pre-prepared concrete pier foundations. The units will be clustered, mostly in groups of two, connected to each other by bridges, and connected to beach and boardwalk by stairs and ramps. Atop the concrete piers, the facilities will be perched above the 500-year mark established by FEMA’s Hurricane Sandy Advisory Base Flood Elevation for New York and New Jersey—7 feet to 14 feet above grade and 4 feet to 8 feet above the boardwalk depending on location.

The buildings are oriented perpendicular to the boardwalk, sometimes positioned on the beach side, sometimes on the land side. Though they are programmed for different functions, the architectural expression, materials, and hardware are standardized to take advantage of the new efficiencies of industrialized construction.

Corrugated 316 stainless steel cladding wraps each module lengthwise, top and bottom. “Because they’re on piles, they have an elevation on the underside,” said Garrison. The long sidewalls are clad with fiber reinforced concrete panels and louvers of black locust wood, which provide shade for continuous ventilating clerestories. While the majority of the spaces will be unconditioned, portions of the restrooms will be heated for those who use the beaches in winter, such as surfers. But with a double skin system wrapping the steel frame and plenty of cross ventilation, the facilities are expected to be comfortable during the hot months as well.